In her career as a financial advisor and manager, Jill Packard helped many people open funds to meet their charitable goals. She has also devoted herself as a volunteer to nonprofit organizations. Given her insider’s view of the mechanics and impact of philanthropy, it was natural that Packard would find her own way to support programs and projects close to her heart. 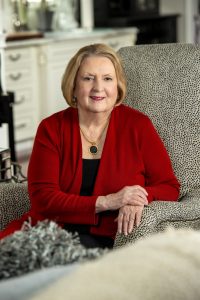 That’s why, in 2017, she created the Jill Morgan Packard Donor Advised Fund through the Community Foundation.

Born and raised in Endicott, Packard earned a BA and MA in Romance languages at Binghamton University before joining Merrill Lynch as a financial advisor. As a volunteer, she spent three years managing the Yegatta Run, a 5K race related to Binghamton’s Yegatta Regatta river rafting event, with proceeds going to the American Cancer Society.

After ten years in Merrill Lynch’s Binghamton office, Packard entered the company’s management training program. “As part of that, I was moved to Connecticut, where I held a number of different positions with Merrill Lynch,” she said. “The last one was managing director for the Hartford and New Haven areas.”

Retirement brought Packard back to Broome County. “I have family and close friends in the area, so it seemed like the right thing to do,” she explained. Since her return, she has served on the Community Foundation’s Arts and Culture Grants Panel, reviewing applications and recommending grant awards to the Foundation’s Board.

Packard feels drawn to the arts, and her work on the grants panel nourishes her thinking about how to use her fund. She has supported two exhibitions at the Roberson Museum and has been assembling new ideas about programs to support in the future. “On the grants committee, I’ve been exposed to some other organizations, and I’m thinking about a couple of things that look pretty interesting,” she said.

Besides letting donors steer support toward causes they care about—making gifts during their lives and long after they’re gone—donor advised funds help donors make a significant impact on their communities, Packard said. “When people start thinking about how they want to be remembered, and what kind of influence they want to have over things that they’re connected to, the donor advised fund is the best way to go.”

Chobani Creates a Fund to Bring Big Ideas to Life